We offer a micro-current therapy system, "ElesAs" for advanced relief of pain and release of muscle tension. Many orthopedists and physiotherapists want to reduce rehabilitation time for early recovery of patients' motor function and early return to society. You can do that with the unique biofeedback system of "ElesAs".

The made in Japan "ElesAs" is a portable microcurrent therapy unit to recover one’s motor function.

Unlike the other electrotherapy unit which uses a strong electricity and establishes the “gate control theory”,ElesAs uses microcurrent to relieve pain and swelling caused by injury to muscles, ligaments and tendons in sports.

How does it work?

Damage to cell membranes or abnormalities in membrane potential, by injuries or overwork or stress etc., increases the internal impedance and reduces the tissue conductance. These results in the disruption of the body’s normal electrical balance. As shown on the left picture, to treat this disruption, ElesAs occurs a two-way communication.

Waveform change when electrode is attached to the forearm

Unlike the general mA electrotherapy device, "ElesAs" uses microcurrent(㎂) , the stimulation of it is 1/1000 of mA.

The weak stimulation produced from microcurrent will not suppress pain transmission, nor give the patient a sense of electrical stimulation, nor stimulate muscles.

Moreover, as ㎂ is very similar to the body's own electrical current, it makes the feedback from the affected area possible.

By this feedback system, ElesAs could confirm the abnormality and impedance value of the treated area and generate the current which is needed for the body.

The waveform of ElesAs is made up from overshoot and Plateau waveform. The start of overshoot takes only 13㎲, this helps the normalization of the impedance end quickly.

fig.3 The change of the membrane voltage, alters the voltage-dependent ion channel existing in the membrane.

For an early cure

In the acute phase, use Mode 1 to help self-repairing by enhancing the cell metabolism. In the chronic phase, as the action potential decreases, firstly use Mode2 to make the potential difference normalize, and after using Mode 2 use Mode1.

Mode-2 normalizes cell-to-cell communication by normalizing the potential difference between the inside and outside of the cell, which is disturbed by tissue damage. Used to improve cell arousal, repair, and neurotransmission.

As the cells and the external environment of the body are prepared and the homeostasis is reconstructed, the healing speed is improved by 30% or more compared to the conservative therapy as shown left. As a result, the pain is immediately reduced or eliminated.

Among athletes who are required to exert especially large power, like hammer throw and weight lifting etc., repeats heavy training. Because ECC (eccentric contraction) is involved in various physical activities, it is thought that many of the causes of long-term muscle fatigue that occur in these athletes are due to muscle damage. In order to improve training efficiency, it is necessary to take measures: such as reducing muscle fatigue from muscle damage or promoting recovery from fatigue. 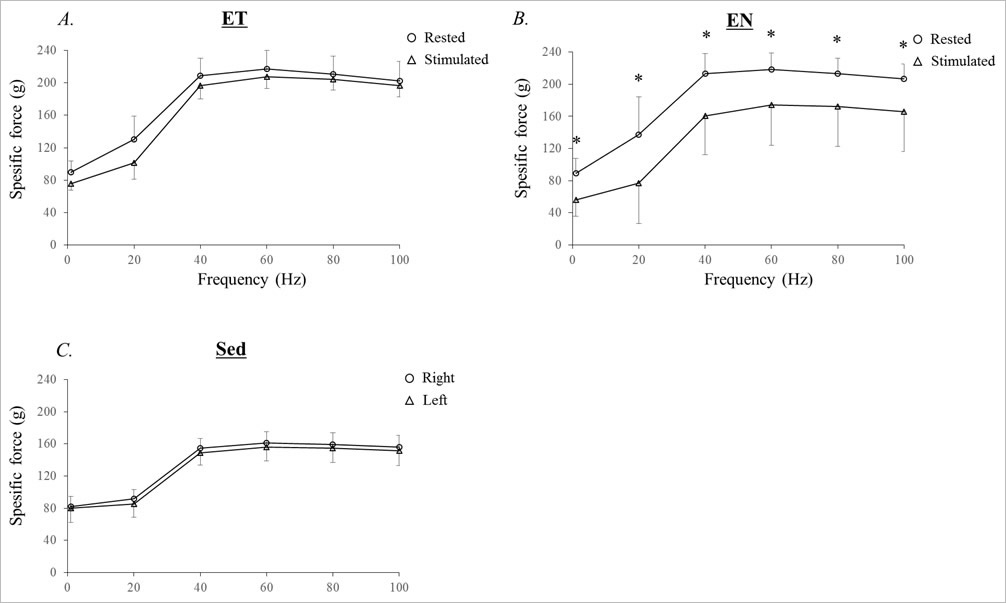 The decrease of myofibril function was suppressed.

The degradation of RyR (ryanodine receptor) was suppressed.

Could ElesAs promote the recovery of tension, reduced by stretch contraction?

If so, what it the mechanism?